An FIR was registered against the accused after the autopsy of the dog which was possible only after a volunteer from rescue group Janhit Sewa Samiti wrote to Maneka Gandhi. 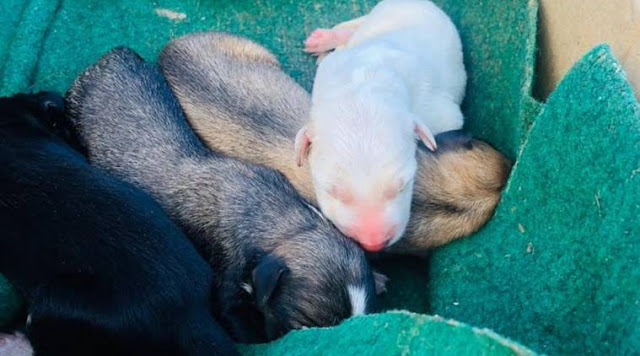 Hours after a dog gave birth to four puppied she was beaten to death with sticks and bricks, dragged from a motorcycle for at least two kilometers until she died and then dumped into a pond in Khudda Sanur village of Patiala last Saturday.

Two eyewitnesses informed rescue group Janhit Sewa Samiti about the incident who then came to the rescue of the four newborn pups, however, but two of them died on Thursday.
Two days after the incident, an FIR was registered following which an autopsy of the carcass was conducted. The report confirmed severe injuries to the skull and private parts of the animal.
According to The Indian Express report, Simran Kaur Mehrok (24), a nursing student in Patiala and volunteer with Janhit Sewa Samiti, who rescued the four pups received a call on Sunday evening from some village youths who approached her for help. Initially, they were “very scared to reveal anything” and just asked her to rescue four puppies as their mother had died.
“They saw a man thrashing the dog mercilessly with sticks and stones. She had just delivered four babies on July 4 and the next day at around 11 am, the man beat the dog till she fell unconscious and then dragged her after tying her to a motorbike. Those two youths tried to intervene and save her but the accused verbally abused them. The dog had already died by then,” said Mehrok.
On Monday morning, when Mehrok reached the village to rescue the puppies, the dog’s body was found floating in the pond. She went to the home of the accused. Upon reaching the accused’s mother claimed that the dog bit her on the finger but there was no injury. When Mehrok asked her if she got injections as the dog bit her, she had no answer. Later villagers revealed that the dog had just delivered but the accused and her mother were trying to disturb her, due to which she had just barked at them.
After waiting for long hours for the police to come, when they did not turn up, Simran wrote to Maneka Gandhi for help. She responded immediately and ordered the local administration to help the dog. It was only then that the body was taken for autopsy and an FIR was registered on July 7.
The accused, a man identified as Manga Singh, and his mother, are absconding and their home is locked. Inspector Karamjit Singh, SHO, Sanur police station, assured that raids were being conducted to trace the accused.
Meanwhile, Simran has been taking of the newborns. An investigation into the case is underway however, even after four days no arrest has been made by the police.
20.59368478.96288
Prev Post

Alfie, the alpaca, just discovered mirrors. His interaction with them is extremely hilarious